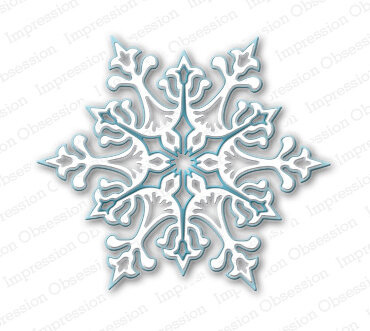 on 09/11/2019 - Fabulous Die! Plus usage tips.
This is a gorgeous large die that cuts 4 separate snowflakes at the same time! Best usage tip is to adhere your paper to sticky-backed adhesive before die-cutting. Not only will this eliminate gluing, but it will help the very thin outer-most ring hold its shape. However, even with adhesive-backed cardstock, the outer ring is delicate and flimsy and needed to be pulled from the die slowly. At first, only portions of the die cut through, but after switching to a chrome precision base plate instead of a regular cutting pad, I was able to cut additional cuts in a single pass. This is a really cool die, but it requires some patience.

on 08/22/2014
When I received this die, I immediately tried to use it and found that it did not cut all parts of the design, even after I shimmed the areas that did not cut. I went so far as to tape pieces of paper on the back of the die to "shore up" the area that did not cut. Even that failed to give me a complete cut of this very, very detailed die. I finally called 123Stitch and they very gracefully and without any hesitation, agreed to send a new die to me. It arrived very quickly and the new die works well. Kudos to 123 Stitch! That said, be aware the the design is VERY intricate and presents some issues for attaching the design to any surface. I'm still working on the challenge, but the pieces except for the smaller center ones are very "flimsy" and are difficult to glue and put on another surface without losing their shape. My next attempt will be to cut it after placing it on double-sided adhesives. That may allow it to be manipulated without distorting the shape. Other than that issue, the die is great and the only reason I down-graded it was the poor quality of the first one I received and the difficulty of working with the paper shape after cutting.