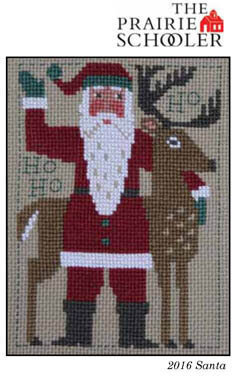 on 01/31/2018
I'm not a very adept stitcher but the pattern is easy to follow and it is going quite well. I'm doing it on 14 count fabric to turn into Christmas stocking for my new granddaughter.

on 10/09/2017 - Prairie Schooler 2016 Santa card
I had every year with the exception of 2016 and am delighted to complete my collection. I've stitched many of them as stand ups and pillows. Delighted with the card and condition.

on 02/05/2017 - A Wonderful Surprise!
I thought that 2015 was the final year for these Santas, but I was wonderfully surprised by this offering. I have completed the entire set of Prairie Schooler Santas and they are framed in sets of 4.

on 01/28/2017 - Old customer
Love the prairie schooler santas. I have been stitching them for many years and always can depend on 123 to have them. Thanks! Great customer service!

on 12/27/2016 - Prairie schooler....Santas
These sat as are classic......the colors of the threads is perfect for the fabric you useI have collected all santas and ther are my very favorite

on 11/16/2016 - One of my favorites
Prairie Schooler charts are the easiest to read. This design is a Christmas gift on a very large count fabric and will make a beautiful decorative pillow. Colors are bright.

on 11/05/2016 - Prairie Schooler 2016! They're backkk..
I was so excited to see this Santa, I thought that there would be no more from Prairie Schooler. This is a really good one, love the reindeer especially! Still time to get this done before Christmas.

on 11/01/2016 - Absolutely love this item!
With the notice that there would be no more further Prairie Schooler santas coming out annually, I was surprised and excited to purchase this chart. My Prairie Schooler annual Santa collection is now complete. Yeah!

on 10/21/2016 - Another interesting pattern
I've been doing the annual Santa pattern for 30 years. Every year there's another fun pattern.

on 10/17/2016 - Yearly Santa
Every summer the Prairie Schooler puts out it's annual Santa. And every year they have Santa partaking in assorted hobbies. I think the year I like best is when he's outfitted with a fishing pole. Living in Wisconsin, nobody would even notice its Santa, just another angler!

on 10/10/2016 - Cute Santa
I am in the middle of this project, and it is very easy to follow, I love the colors and it is coming along very quickly. I can tell it will be cute and a nice addition to my Christmas decorations!

on 10/10/2016 - Prairie Schooler - 2016 Santa
LOVE these Prairie Schooler Santa's that are put out every year. My Mother how is 91 started cross stitching these when they first came out and has done every single one of them. Hope they will continue for many years to come so I can pick up her tradition of doing them in future years.