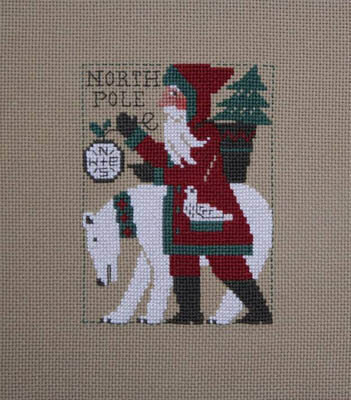 on 12/02/2020 - Another fabulous pattern
I am thrilled that you are carrying so many Prairie Schooler patterns. This was fun to stitch!

on 09/12/2019
Had to have this chart! Just look at polar bear and santa is holding a cross stitch hoop that looks like a compass. The Prairie Schooler Santa charts are very easy to stitch and are great for first time stitchers as there are not an lot of colour changes.

on 01/10/2018
Love all the Prarie Schooler patterns. Looking forward to stitching this one.

on 11/26/2017
A very beautiful chart! I have made all the Prairie Schooler santas. I gave them to my daughter as a Christmas gift 2 years ago!

on 11/06/2017 - Annual treat!
I always look forward to the annual Prairie Schooler holiday pattern. I've made many of them.

on 11/04/2017
I have done all of the prairie schooler santa in this series. I make door stop from them. I have to say they look great and make nice gifts.

on 08/17/2017 - beautiful
I haven't gotten to this yet, but I have stitch many Prairie Schooler santa's in the past and they are always beautiful and fun to stitch. They make beautiful ornaments for yourself or as gifts.

on 08/13/2017 - Schooler Santa
I Love the 2017 Schooler Santa, I started to collect Schooler Santas in 1984 and I have Loved everyone, the designs are so much fun to Crossstitch. So sorry they are being retired.

on 07/27/2017 - Great series
Having stitched at least eight of these Santas, it is enjoyable that they use the same color palette and are about the same size so that I can gift them in pairs or year after year to my family.

on 07/26/2017 - Prairie Schooler Santa Cross Stitch 2017
My Mother is 92 and has been doing these since they started. We are making a hanging quilt with them. Love these and I will always remember her doing these. Hope they continue the line for years to come as I will take off whre she leaves off.

on 07/10/2017 - Love these yearly santa patterns!
I love Prairie Schoolers patterns! I was excited to see another santa pattern this year as well. I hope they continue with the tradition.

on 07/03/2017 - Prairie schooler yearly Santa
Have stitched all the Prairie Schooler yearly Santas. They stitch up fast and are easy as there are no fractional stitches. Have also stitched a couple on 7 count fabric for pillows, turned out great. Love, love, love these patterns.

on 06/26/2017 - Really enjoy Prairie Schooler Santas
I have been making these Santas since 1984 when the first one came out. I look forward to the new one each year. I have them all, along with the Prairie 12 days of Christmas on my walls all year long. Even though Prairie has "retired", I sure hope they continue the yearly Santa tradition for many years to come.

on 06/25/2017 - So Glad They Came Back!
I have made every Santa in this series since they were introduced in the 80's. 2015 was announced to be their last and I was devastated! Then last year a new pattern appeared and now this one. I love the consistency in the color palette and fabric. I hope they keep going,