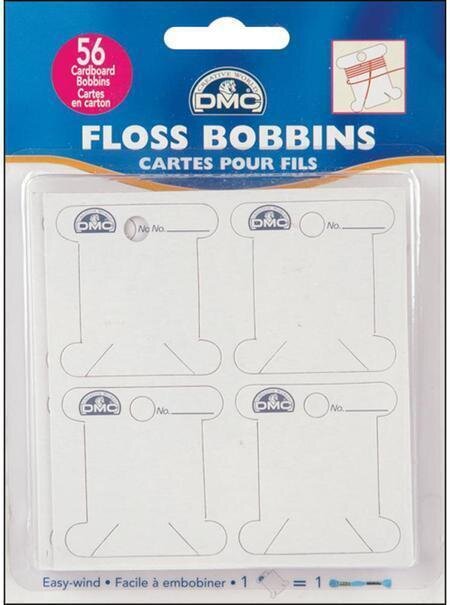 on 12/02/2021 - The best for me!
These cardboard floss bobbins are great! They are sturdy and do the job of holding my floss collection in a neat, orderly fashion. I don't like the plastic bobbins for several reasons, so these from DMC are perfect for me.

on 11/30/2021 - Great
Great price for these, I haven't seen them any cheaper anywhere. They're a classic and they work great.

on 11/12/2021 - Cardboard Bobbins
I have always put my floss on bobbins. I love these cardboard bobbins. They are easier to put the number on than the plastic and are very inexpensive. Shipping from 123 stitch is very quick. Highly recommend this product.

on 05/04/2021 - good bobbins
Good cardboard bobbins & ink doesn't smear after writing the floss numbers. Great tip in reviews of popping them all out at once - worked great!

on 12/28/2020 - best bobbins
I had been using plastic bobbins and found it difficult to permanently mark them. Decided to try paper bobbins on a whim and I'm never going back. Really nice, sturdy enough for the job, easy to write on.

on 11/23/2020
Finally found the cardboard ones *(which made me a happy stitcher, don't like the plastic ones). You can't write well on them (ink smears off).

on 08/19/2020 - Most useful, inexpensive thread holders
Use these, and your thread won't tangle. Use these, and you can write both the thread number and the symbol right on the card. No need to mess with stickers which are hard to position on tiny plastic cards. Finally, use these - and toss them if they get bent. They are inexpensive.

on 02/02/2019 - bobbins
I'm not fond of bobbins for storing my floss, however, when I do use bobbins for left over thread I prefer cardboard ones. It's just a preference of mine when I mark colors. They are fewer available but I don't use tons of them either

on 09/04/2018 - Better than plastic
I couldn't get these in my local craft stores and Wal-Mart they only had plastic which I don't like. I just wish they were easier to "punch out" as I have neuropathy in my fingers. Some of them peeled while trying to punch them. Thanks 123 for carrying these and your prompt service!

on 03/19/2018 - cardboard cutout embroidery floss holders
Most were okay, but a few of them were peeling apart

on 01/11/2018 - Not bad
The only bobbins I could find locally were plastic, and I prefer cardboard. Ordered these, and while they are not as thick as the old ones I had, they work fine. Shipping was fast as always. Thanks 123 for great selection and great customer service.

on 08/25/2017 - Only cardboard ones available
You used to buy these cardboard bobbins and you didn't have to take them apart-some were not perforated well making it more difficult. Also, they are a tad taller than my old ones which makes the lid on my storage container bulge a bit when snapped closed. I buy them because I like the cardboard over plastic and it's the only ones I could find except some fancy decorated ones that cost a fortune. I will buy again but I wish they would size them down just a tad.

on 04/23/2017 - Difficult to find bobbins
I had difficulty finding the cardboard bobbins and I don't care for the plastic ones. So glad to purchase them in here when ordering other items.

on 09/21/2016 - DMC Floss Bobbins
I have always loved them as they are both sturdy to use and inexpensive, also. Sincerely,Marna Olson-Coulter, Cedar Rapids, Iowa

on 06/09/2016 - Great product
I have used the plastic bobbins before but I always go back to the cardboard bobbins. I can write the number on them with a sharpie and it doesn't smear or fall off like the plastic ones. They are strong enough for 1-3 wrappings per bobbin then I usually get a new one for that number. I highly recommend.

on 03/25/2016 - Perfect!
Just what I needed - but I had more fun punching out the cards and making lots of little white dots from the top of the card!. Now I have to wind thread for days and days and days....

on 02/20/2016 - Love these!
I love these sturdy affordable bobbins, and buy lots of them. Just right for storing my thread stash!

on 01/07/2016 - Easy and quick to use.
There are several ways to store embroidery floss and I like this one the best. It is quick, easy to store, and easy to keep track of which colors you have with the small labels that are available to go along with this product.

on 01/04/2016
Only way to organize your DMC floss. The cardboard ones can be written on and can be stored in any container.

on 11/25/2015 - I prefer these to the plastic bobbins
These are affordable like most stitchers, I need lots of them, easy to write on, nicely sized to fit in my floss storage bins, and lightweight to travel with. They're winners all around!

on 07/27/2015 - An orgnaization technique you can't be without
Inherited many skeins of floss that need to be filed in my cases.

on 06/02/2015 - My Favorites!
I use these exclusively to organize my 14 boxes of floss! I thought that I b would like the plastic ones, which do last forever, but...I can't get even a permanent ink to not rub off, so it is cardboard for me, writing with the smallet "Sharpie" pen tip!

on 05/30/2015 - Great purchase
These make it so much easier to store and retrieve flossthread. When selecting a length of floss from the skein it often results in a jumbled mess. Unwinding from the bobbins is so much easier.

on 01/28/2015 - Floss Bobbins
I feel very fortunate that I found this product via 123 Stitch. I tried 2 other local craft stores in MN and both places were out of stock. Price was fair compared to some places! I much prefer DMC products versus Sullivan. Thank you!!!!

on 12/03/2014 - Cardboard Bobbins
They work and I c an write on them without having to worry about stickers falling off or "permanent" marker rubbing off.

on 08/26/2014 - Floss Bobbins
I recently ordered the cardboard floss bobbins. I like the cardboard better than the plastic because I can never get those little sticky number tabs to stay on the plastic bobbins. The cardboard have always been my favorite type of bobbin. The cardboard bobbins I ordered from 123stitch.com are a good bargain. You get a good number of bobbins for a reasonable price. I have found everything I have ordered from 123stitch.ocm to be quite a bargain. It is difficult to find a craft store near me without driving 20 miles so I order most of my stuff from 123stich.com and have been very pleased with everything I have ordered from them as well as the shipping time. They are in Utah and I live in Virginia and I usually have my items in 2 days time.

on 03/15/2014 - cardboard bobbins
These come in handy when you are working on a project to keep the extra thread on. I have all my colors on the plastic bobbins. It is so much neater to have the access thread on it.